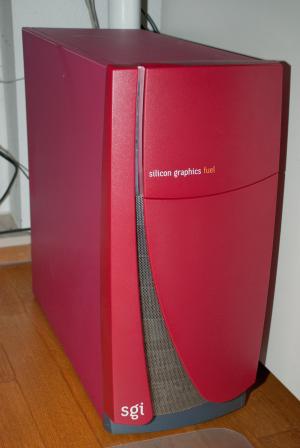 The Silicon Graphics Fuel, introduced in 2002, was intended to be a single-CPU midrange solution for those customers who did not need multiple-CPU capability, thus offering a much cheaper system compared to a baseline Tezro or top-spec single-CPU Octane 2. Contrary to popular belief, Fuel was not a successor to O2. SGI never made a follow-on to O2; a new system was designed (internally known as the Banana2000 or b2k) but was never developed beyond a prototype.The Fuel has a somewhat contentious reputation in the enthusiast community. In terms of form-factor and internal design, it is the most "PC-like" of the MIPS workstations, sharing much of its design the Visual Workstation 230. Due to SGI's need to cut costs the Fuel is also likely the most error-prone workstation that SGI produced, with frequent failures of power supplies, mainboards, and environmental monitoring which most heavily plagued early revisions. The frequent failures also means a shortage of available parts, and what parts are available are expensive. So while the Fuel was meant to be a reduced-cost version of the Origin 300 architecture, it is actually the most expensive MIPS desktop to own.

Fuel shares the IP35-architecture with Origin 300, Origin 350, Origin 3000, Onyx 3000 and Tezro systems.In terms of design, it is closest to a single-node Origin 300 with graphics, based on the environmental monitoring and other support chips.

The design is very similar to a standard ATX PC with the exception of the memory/CPU positions and the XIO2, used for graphics, being below the PCI-X expansion slots, meaning the board is longer and wider than a typical ATX motherboard.

The Fuel is a single processor system and can take either:

On introduction SGI claimed an industry-leading 3.2 GByte-per-second processor to memory bandwidth, and half that to the graphics subsystem. The DIMMS used are compatible with those used in the Origin 3000, Origin 300, Origin 350, and the Tezro. There are a total of four slots, organized into two banks of two slots. This results in a memory capacity from 512 MBytes to 4 Gbytes total system memory.

All DIMMS for the Fuel use Double Data Rate (DDR) synchronous dynamic random-access memory (SDRAM), at the lowest level organized into banks of two DIMMs each - memory may only be added or removed from the system in pairs of two DIMMs. Both DIMMs within a bank must be of the same density, however two different banks may hold different density DIMMs from each other.

SGI produced DIMMs with capacities of 256MB to 1GB, using DRAM chips with densities of either 128 Mbits or 256 Mbits. All DIMMs include directory memory to support cache coherence between local and remote memory, which remains unused in the Fuel. Memory was generally marketed in kits of two DIMMs, where the capacity of the kit would be given as 512MB, 1GB, or 2GB.

Internally, the boot drive attaches to the mainboard with a 68-pin SCSI cable. Unfortunately, the connector on the mainboard itself is *not* a standard 68-pin connector and is actually a proprietary socket used only by the Fuel. Rough handling of the swivel-out hard drive tray is known to fray these cords, making them a difficult part to source.

The Fuel is the only MIPS workstation to have a USB-controller built-in. As such, USB sound cards are common alternatives to PCI for Fuel users.

Four PCI-X slots are provided, two at 66MHz and two at 33MHz.

The Fuel used several different power supplies over the life of the model. These units conform loosely to the WTX specification, a standard similar to ATX but more oriented towards servers. Unfortunately the Fuel is different enough that neither WTX nor ATX power supplies will not work without modification. It is believed that SGI also requested other changes for this application, including a special monitoring circuit.

IRIX Versions from 6.5.17 through 6.5.30 are supported on this machine. Firewire support became functional around 6.5.27

The Fuel's cheap design has lead to many common points of failure that can destroy a system:

Capacitor failure is common on these boards and some just mysteriously die without a cause.

The CPU boards is located at the front of the case, and the memory is in front of it for airflow. This results in insufficient airflow to the CPU which can result in failures.

The same is true for the XIO2 graphics board. They are notoriously prone to failure due to either fan failure or lack of ventilation. There are no easy workarounds that exist.

The fans are tied to the environmental monitoring system and do not use the standard pinouts. This section will eventually link to a separate page discussing this.

Fuel power supplies are variants of off-the-shelf units offered for consumer PCs. However the pinouts, if not the voltages and functions, differ even though the OEM part numbers do not. An ATX adapter is available from Kuba Tyszko but it should be noted that this should only be used with ATX power supplies that are capable of providing 30 amps on both the 3.3v and 5v rails, which is somewhat uncommon.

Temperature sensing on early Fuel mainboards is notoriously prone to failure, rendering the computer inoperable if environment monitoring is left on. Turning it off can allow a boot, but is not recommended.