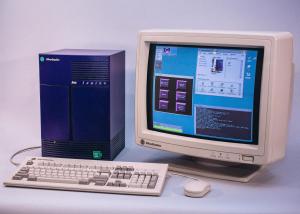 An Indigo in a contemporary setup for it.

The SGI Indigo (Also known widely as the IRIS Indigo) is a line of high end workstations using the MIPS processor family released as a successor to the Personal IRIS series.

The Indigo R4000 was also the first SGI workstation that that featured the 64bit R4000 RISC CPU on the desktop, the first SGI in general using the new CPU was the Crimson. The Indigo offers builtin audio capabilities and comes in a very well designed and space efficient chassis. With one of the Express graphics options it offers accelerated 3D graphics.

The Indigo, unlike later SGIs, does NOT possess support for PS/2 and uses the same keyboard as the SGI Onyx and Crimson. To use PS/2 peripherals necessitates an adapter.

The graphics board uses the 13w3 connector which requires a SOG compliant monitor.

All Indigo systems have three drive bays for internal 3.5" SCSI devices that have to be mounted on special drive sleds to be used in the systems. The upper two of them can be accessed from the outside through a small door which makes them usable for removable media drives. To remove any of the three drives the front plate has to be removed which is impossible if the system is secured with the locking bar.

The skins of the Indigo are colored in a dark blue which has a decent hint of purple to it. On R3000 Indigos the type of the graphics option the machine was shipped with was printed on the front door. On R4000 a small badge was used that in addition to the name of the graphics option included "4000" to denote the faster CPU type.

General support for the Indigo can be found in the all platform releases of IRIX 5.x. Only the R4000 models were supported by IRIX 6.2 and IRIX 6.5. The support for the remaining legacy systems like the Indigo R4000 was dropped after 6.5.22 making IRIX 6.5.22 the last version to support any of these systems. 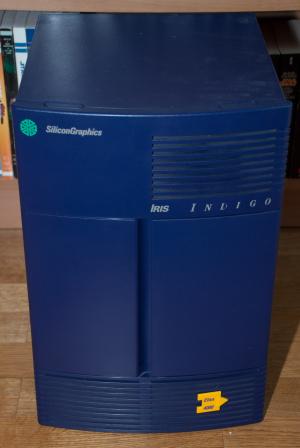 The Indigo does have a number of potential failures:

Signs of failure: The system fails to boot and repeats the message "Can't set tod clock"

This error is very common these days and it occurs during boot time. It usually means that the onboard battery is empty and that the system can't set it's clock. It is not fatal and some systems even recover when they are run for a while. This error does not occur while the system is running.

In the long run a cheaper solution is to wire a socket for a generic button cell to the battery connectors on the main board. The socket could be fixed on one of the GIO32 bus placeholders. The Indigo will work just fine with a standard and much cheaper 3 V button cell (like a CR2032).

Signs of failure: While booting the system displays a message like "Warning: Revision C Memory Controller (MC) chip needed in order to properly operate with SIMMS of this type."

When upgrading memory on an R4000 Indigo IRIX might issue the above warning if there is no Rev C memory controller installed in the system (This can be checked using /usr/gfx/gfxinfo). If all memory is detected (i.e. shown in hinv) and there are not unusual problems with the system since the upgrade it should be safe to ignore the message. It was added when there were bugs in some memory modules. The upgraded Rev C memory controller contains a workaround for these bugs, but as these have also long been fixed there should be no problems today - even with older MCs.

In later IRIX the warning message has been worded differently: "WARNING: You may need a memory controller revision C because of the type of simms installed. If you don't experience any memory errors you won't need MC revision C"

In general this means that the EEPROM that contains the hardware ethernet address is dead or contains invalid data. It is an 8 pin MiniDIP serial EEPROM (93C56) which is socketed on the backplane.

In many cases the reason is, that in the Indigo different CPU boards (IP20, then IP12) were used. The location of the address is different between the two boards and is properly relocated when a system is upgraded from IP12 to IP20. When the IP12 is placed back in the system the MAC address is erased.

A possible solution is to place the IP12 in the system and reset the mac address from the PROM monitor using the eaddr command - the IP20 doesn't allow that. After that the system can be used with the IP12 board or upgraded to IP20 which will relocate the address once again.