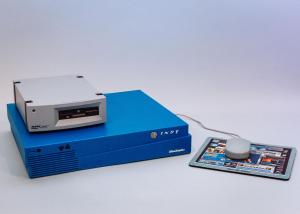 The Indy, code-named "Guinness", is one of the low-end workstations by Silicon Graphics. Selling for around $5000 USD at base price it was one of the cheaper models. It is notable for its common-ness, comparable to the Amiga 500 for Amigas, and its use in development for the Nintendo 64. It was introduced on July 12, 1993 and discontinued on June 30, 1997.

The Indy is a small desktop (dimensions 41 x 36 x 8 centimetres) computer consisting of a steel frame with a removable bright blue plastic skin. The system is capable of supporting the weight of a small CRT or a modern LCD/LED monitor without damage.

After removing the plastic skin, the power supply, long, thin and bolted to the side of the computer is visible, along with the motherboard, any 3.5" hard disks or the optional Floptical drive, along with the GIO riser and video card, as well as both expansion ports.

Indy's motherboard has a socket for the Processor Module (PM). Early Indys used the 100 MHz MIPS R4000 CPU, which quickly proved inadequate. The Indy, at the bottom of SGI's price list, thus became the primary platform for MIPS's low-cost, low-power-consumption R4600 CPU series. The R4600 had impressive integer performance, but had poor floating-point capability. This, however, wasn't too huge of a problem in a box that was generally not designed for floating-point-intensive applications. For this reason, the R4600 made an appearance outside the Indy line just once, and only briefly, in the Indigo 2. This series of CPU issues, along with the relatively low-powered graphics boards, lower maximum RAM amount, and relative lack of internal expansion ability compared to the Indigo led to the Indy being pejoratively described amongst industry insiders as "An Indigo without the 'go'."

The R4600 chip itself has no L2 cache controller, external controller was used to add 512K of L2 cache. R4600s processor modules both with an L2 cache (SC) and without (PC) are common in the Indy. At the same clock rate, the SC version of the processor module is generally 20 to 40 percent faster than the PC version, due to the memory cache.

The Indy was also the first SGI to utilize the MIPS R5000 CPU, which offered significant advantages over the R4400 and R4600 it replaced. The Indy's 180 MHz R5000 module can be overclocked to 200 MHz by replacing its crystal oscillator chip.

The system takes standard 72-pin SIMMS (gold plated SIMMS are recommended to avoid dielectric corrosion) and can take anywhere from as low as 16MB to 256MB, these must be added in sets of 4 at a time since the computer is 64-bits and each SIMM is a 16-bit module.Upon release, the base configuration came at 16MB. IRIX 5.1, the first Operating System for the Indy, did not take full advantage of the hardware due to inadequate memory management and the 16MB configuration failed to even boot. SGI quickly increased the base specification to 32 MB, and shipped free memory upgrades at considerable cost. Subsequent IRIX releases made huge improvements in memory usage.

Graphics are one of three possible types: 8-bit XL, 24-bit XL, and XZ. The 24-bit XL card is the most desirable for collectors due to its decent 2D performance and better than the XZ 3D performance when combined with an R5000 CPU. All three options use the 13W3 connector and require a Sync on Green monitor.

The Indy includes analog and digital video inputs, such as Composite and S-Video, as well as a proprietary digital D-sub used by the Indycam. The system is capable of capturing video at a maximum resolution of either 480i or 576i, depending on region.

It takes a fast machine to capture at either of these resolutions, though; an Indy with slower R4600PC CPU, for example, may require the input resolution to be reduced before storage or processing. However, the Vino hardware is capable of DMAing video fields directly into the framebuffer with minimal CPU overhead.

None of the Indys support video output by default - that would require the Indy Video GIO32 card. In addition, there is an optional video module called CosmoCompress, which offers realtime JPEG video compression and decompression and uses up another GIO32 slot.

For networking, the Indy has an on-board AUI, an ISDN port, and a 10Mb Ethernet jack. The AUI and Ethernet cannot be used at the same time, the Ethernet jack takes priority automatically. 10/100Mb cards are available on the used market for faster connection speeds.

The Indy has two drive bays for 1-inch tall 3.5" drives. The upper drive bay is externally accessible and may hold a SCSI floptical drive. All external and internal drives share a single Fast SCSI bus (unless a GIO32 SCSI card has been installed). External CD-ROM drive connect via SCSI connector at rear side of the box. Typical drive supports boot, OS install, audio. Special ROM is required to boot from for certain device types.

The Indy's basic support came in IRIX 5.1 but that is not a recommended release. The Indy is supported through IRIX 6.5.22, it is recommended to use one of the following releases:


IRIX 6.5.22 has the most software available, but will be slow on systems below 128MB. 6.2 and 5.3 are much lighter weight, but have their own limitations.

The component of the Indy most prone to failure is the power supply. Neither the Sony nor the Nidec varieties are more reliable, and both have benefits and drawbacks.


The Indy's Ethernet address, which doubles as the system's serial number, is stored in battery-backed RAM. This means that when the internal battery dies, so does the system - it will hang at the PROM monitor and refuse to boot any further as a result of the Ethernet address being all FFs. A non-amateur user can replace the PROM battery and reprogramme it. The original battery was made by Dallas Semiconductor, now owned by MAXIM. The original unit was marked the "DS-1386-8K-150", however its replacement unit, the "DS-1386-8K-120" can be directly substituted with no ill effects.

To reset the MAC, it's necessary to use fill commands:


The MAC address is (usually) on a sticker to the rear of the unit, and hence can be reprogrammed without losing software licenses, which often rely on it to verify ownership. Otherwise, any MAC address in SGI's block is usable.