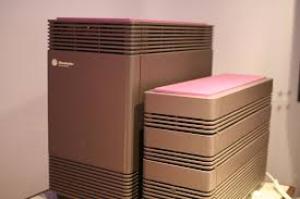 The first widely produced MIPS powered SGIs, these systems were historically called the IRIS 4D GT series. Commonly called the "Twin Towers" due to the distinctive look caused by the disks being kept in a smaller sidecar tower, these systems are notable for being among the most rare and undocumented MIPS powered SGIs. Released firstly as the 4D/60, then as three models, the high end 4D/80, the midrange 4D/70 and the low end 4D/50 differing by CPU and graphics configuration, and the ultimate 4D/85 released in late 1988. The "Twin Towers" design seems to have carried over into the early POWERSeries systems released much later.

The Clover 1 and 2 systems, called G and GT respectively (for Graphics, and Graphics, Textured presumably) were the primary graphics options of the systems.

Similar to other IRIS4D machines, they used a DB9 custom serial keyboard and mouse, similar to the Personal IRIS.

Some reports point to a 4D/85 Single tower model being offered, but little to nothing is known about it.