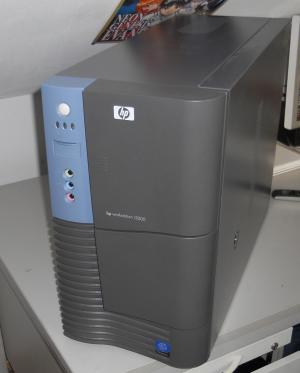 The HP i2000, the same computer under a different marque

The Silicon Graphics 750, released in May of 2001, was the first Silicon Graphics product offered with an Itanium processor. It was intended as a development platform for developers of IRIX on MIPS applications to port their software to Linux on Itanium ahead of the release of SGI's full Itanium product line. However, after poor sales and the limited performance of the first-generation Itanium processors it used became apparent, it was discontinued early, leaving SGI without an Itanium product between December 2001 and January 2003 (when the first Altix systems were introduced). A rebrand of an Intel-made Itanium developer system, it was sold by multiple manufacturers as the following products:

As such, this article also applies to any of these non-SGI-sold systems. The SGI branding on the SGI 750 consists of simple stickers on the case plastic and minor software branding tweaks.

The SGI 750 featured one or two first-generation Intel Itanium Merced processors on its processor board, up to 4GB of PC100 SDRAM on two removable Memory Expansion Cards (MECs), seven PCI expansion slots, and an AGP 4x graphics card slot fitted with an ATI XPERT 2000 PRO graphics card. It appears to have used EFI as its firmware, and included a graphical configuration tool. It was intended to be used with Linux.