For the rackmount variant of the SGI Onyx 350 branded as a Tezro, see Origin 350 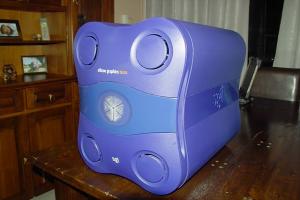 The Silicon Graphics Tezro (styled as silicon graphics tezro) is a high-end workstation introduced by Silicon Graphics in July 2003 to replace the Octane 2. Built on the Chimera architecture, the Tezro is closely related to the Origin 350 and Onyx 350 systems offered by SGI during the same time period and shares the graphics module, node boards, drive sleds and some cooling parts. The Tezro is essentially a single-node Onyx 350 mounted on its side and connected like a sandwich to the IO backplane. The system was succeeded late in 2006 to early 2007 with the launch of the Prism. The Onyx4 launched alongside it, though that utilized the ATi developed UltimateVision. This distinction makes the Tezro the last machine designed by SGI to use an in-house graphics architecture. The Tezro is highly sought after in the collector market for its style, power, and for the distinction of being SGI's last MIPS workstation.

The Tezro is powered by the MIPS R16000 series of processors and came in dual and quad CPU node boards. The CPUs are attached to the node board, thus a configuration upgrade requires removal of the entire node board.

A maximum of two 300GB U160 SCSI drives can be added to the system via the front access panel using the Origin/Onyx 350-style sleds.

Tezro supports the V10 and V12 graphics options. Dual-channel options were produced, allowing up to two 1920x1200 displays. The V12 was the only **shipped** configuration, but some machines were field replaced with V10s, or have been replaced by end users to re-purpose V12s for other machines.

Two USB ports and PS/2 are provided. USB Mass storage is not supported for the SGI PROM and by IRIX.

The fans are controlled by environmental monitoring and the system will refuse to boot if the fans do not all respond.

The 1GHz/1000MHz CPU boards are known to overheat quickly due to inadequate airflow in the case. It's advisable to set external temperature monitoring and alarms and to not run the machine unattended, as this risks VRM or CPU failure. The latter means a new node board.

The Tezro measures 21 x 14 x 17 inches in L x W x H dimensions and weighs at minimum 61lbs, more if it is heavily equipped. The front access panel is very fragile, and the system should not be held by the plastics as they grow brittle with age.

The unit has wheels on the rear, allowing for easy movement on hard surfaces. It should be carried gently and preferably with the rear of the unit supporting the weight, not the sides or the front.