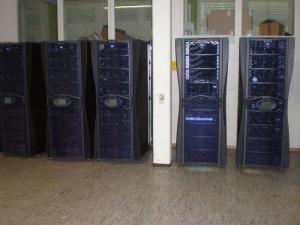 The SGI Origin 3000, is the successor of the SGI Origin 2000 line. Unlike previous versions, it did not offer a deskside version, opting for full and half rack configurations instead. It also introduced the "brick" architecture used by many Chimera architecture SGIs. 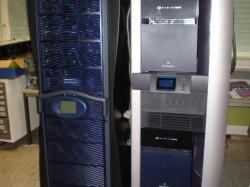 Physically, the Origin 3000 is based on "bricks" - rackmounted modules that provide a specific function, that are connected together using NUMAlink 3 cables for modules providing compute functions, or Crosstown2 cables for modules providing I/O functions. These bricks are mounted in a standard 19-inch rack. There are two racks for the Origin 3000, a 17U-high half rack, and a 39U-high tall rack. Architecturally, the Origin 3000 is based on the distributed shared memory NUMAflex architecture. The NUMAlink 3 system interconnect uses a fat tree hypercube network topology.

The following table shows a list of models and their possible configurations: 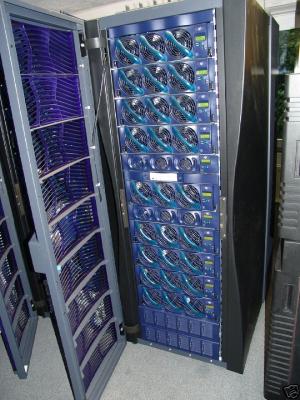 A full rack of various bricks

The C-Brick (Compute Brick) is a 3U-high enclosure that contains CPUs on a PCB. The node contains two or four processors, the local and directory memory, and the Bedrock ASIC. The two processors and their secondary caches is contained on a PIMM (Processor Integrated Memory Module) daughter card that plugs into two 240-pin connectors on the node board. Initially, the Origin 3000 used the 360 MHz R12000 and the 400 MHz R12000A processors with 4 or 8 MB of secondary cache. In May 2001, the 500 MHz R14000 was introduced with 8 MB of secondary cache and in February 2002, the 600 MHz R14000A was made available. Near the end of its lifetime, the C-Brick was updated with 800 MHz MIPS processors.

The CX-Brick is a 4U-high enclosure that is only used in Origin 3900 and Onyx 3900 systems. It differs from the C-Brick by containing four node boards and eight-port router ASIC. The CX-Brick can support up to 16 processors and 32 GB of memory. The CX-Brick initially used the IP53 motherboard that supported 500 MHz R14000 and 600 MHz R14000A processors with 8 MB secondary caches, later upgraded to use the R16000 and R16000A. It connects to the system using NUMAlink 3.

The R-Brick (Router Brick) is a 2U-high enclosure that features an eight-port router ASIC. Its purpose is to route NUMAlink packets throughout the system to connect the C-Bricks together. R-bricks for the Origin 3400 have a router ASIC with two ports disabled to prevent them from being upgraded into Origin 3800 systems.

The I-Brick is a 4U-high enclosure that provides boot I/O functions for the Origin 3000. It features five hot swappable PCI-X slots, with three clocked at 33 MHz and two at 66 MHz on two separate buses, two sled-mounted 3.5-inch Fibre Channel hard drives and a proprietary CD-ROM drive. The I-Brick also provides a 10/100BASE-T Ethernet port, an IEEE-1394 port, a serial port, two USB ports as well as a real time clock and NVRAM for storing configuration information through the IO9. It connects to the system using Crosstown2.

The IX-Brick is a 4U-high enclosure that is only used in Origin 3900 and Onyx 3900 systems. It an updated version of the I-brick with 133 MHz PCI-X expansion slots. It connects to the system using Crosstown2 cables.

The V-brick is a 4U-high enclosure that supports two InfinitePerformance (Commercial name for VPro/Odyssey Graphics) graphics pipes. Each graphics pipe consists of a 128 MB SGI VPro V12 graphics card. The V-brick connects to the system using Crosstown2 cables. This was one of two options for graphics. 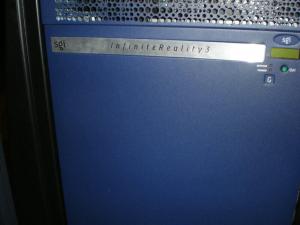 Some systems were offered with D, P, PX and X Bricks. D is for data, and contains Fibre Channel, P and PX are PCI-X peripheral bricks, and X is an XIO brick.

The C-Brick supports 512 MB to 8 GB of local memory through eight DIMM slots organised into eight banks by using proprietary 100 MHz ECC DDR SDRAM DIMMs with capacities of 256 MB, 512 MB and 1 GB. The data path between the DIMM and the Bedrock ASIC is 144 bits wide, with 128 bits for data and 16 bits for ECC. Because the Origin 3000 uses a distributed shared memory model, directory memory is used to maintain cache coherency between the processors. Unlike the Origin 2000, which requires dedicated proprietary DIMMs for the directory memory, the Origin 3000's directory memory is integrated in the same DIMMs that contain the local memory. Due to this, there are two kinds of DIMM used in the Origin 3000: standard DIMMs, which supports systems with up to 128 processors, and premium DIMMs, which supports systems with more than 128 processors. The 256 MB DIMM is a standard DIMM, the 1 GB DIMM is a premium DIMM and the 512 MB DIMM can be either.

The Origin 3000 uses a "Power Bay" that contains up to 6 hot swappable powersupplies and provides the Bricks of the system with power (48VDC). It is connected to a wall outlet using a Power Distribution Unit. For this reason, most configurations require 240V. The 3400 and 3800 configurations had alternative setups for power.

The L2 and L3 Controllers are control systems used to manage the status of each brick in the system and to issue commands, monitor the environment and more. The L2 controller is a small Linux-based silver box that runs Linux on an embedded PowerPC system. The L3 controller was a Linux-based console that could manage several L2 systems.