For the rack variant, see the Origin 2000 article A late era Onyx2 with the later 'sgi' logo

The SGI Onyx2, code name Kego, is the successor of the SGI Onyx. The Onyx2's basic system architecture is based on the Origin 2000, but the midplane and some parts such as the IO6 are different between models. The Onyx2 is notable for the InfiniteReality2, 2E and 3 boards it usually is equipped with, as well as its imposing size, weight and aesthetics.

The Onyx2 deskside form factor can handle up to 4 CPUs distributed across two nodeboards, a maximum of 4 GB of RAM, one GE-16-4, a single DG5-8 for up to 8 displays, and two IR3 or IR4 raster managers for a maximum of 512 MB and 2 GB respectively of texture memory, and can support up to two users simultaneously out of the box. Possibly more with a CADDUO card installed.

A 3-slot PCI cage can be installed as well as a maximum of 10 XIO cards, giving a massive amount of expandability. This is in addition to 5 hard disks and one 5.25 option drive.

The Onyx2 can handle the following revisions of the InfiniteReality: 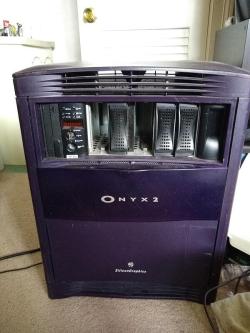 An early model Onyx2 with the old SGI logo and skin

InfiniteReality3 is the next upgrade and one of the most common for the Onyx2 and Onyx3000 on the secondhand market. The only improvement over the previous implementation is replacement of the RM9-64 Raster Manager with the RM10-256 Raster Manager, which has 256 MB of texture memory, four times that of the previous raster manager.

InfiniteReality4 is the ultimate iteration, introduced in 2002. Primarily used on the Onyx3000 and Onyx350 "G-Bricks". The only improvement over the previous implementation is the replacement of the RM10-256 Raster Manager by the RM11-1024 Raster Manager, which has improved performance, 1 GB of texture memory and 2.5 GB of raster memory, four and thirty-two times that of the previous raster manager, respectively.

Below is a performance table offering comparisons: 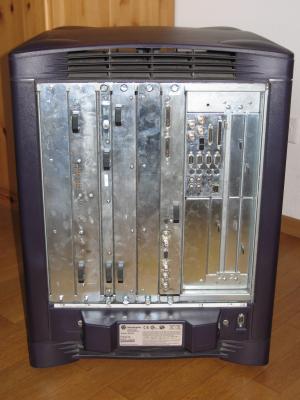 The rear of the system, minimally configured.

DIMMs are available in sizes of 16, 32, 64 and 256 MB. The memory modules used in the Origin 200 and Origin 2000 / Onyx 2 are of the same type. To support the Origin 2000 distributed shared memory model, the memory modules are proprietary and include directory memory, which contains information on the contents of remote caches for maintaining cache coherency, supporting up to 32 processors. Additional directory memory is required in configurations with more than 32 processors. The additional directory memory is contained on proprietary DIMMs that are inserted into eight DIMM slots set aside for its use.

An IO6G base I/O board is present in every system. It is a XIO card that provides:

Also on the card is the Flash PROM, NVRAM and real time clock of the system.

The system can utilize PCI with the addition of an Origin 2000 XIO PCI "Shoebox" or individual XTalk PCI adapters inserted in the cage. These are the same sort form factor as Octane units.