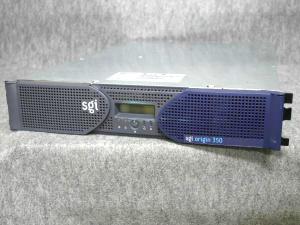 An Origin 350 with the normal skins

The SGI Origin 350, and its graphics-equipped sibling the Onyx350, is a rack-mounted, mid range server sold by Silicon Graphics from 2003 to 2007. This system uses MIPS-based processors and offers a number of advances over the Origin 300 model that preceded it. The 350 was offered in two to 32 processor configurations, at speeds ranging from 600 to 1,000MHz over the lifetime of the model. The Origin 350 is a member of the Chimera family (IP53), which includes Origin 350, Onyx 350, and the Tezro Rackmount. All three systems have the same basic hardware - the Origin 350 (Chimera Server) with a VPro card becomes the Onyx 350 (ChiBlade), and the ChiBlade can be configured into a Chimera Rackmount Workstation (Tezro Rack) using the L1's make rmws 1 command. The Chimera Rackmount Workstation cannot accept remote serial numbers, and therefore cannot be connected via NUMALink.

Each CPU brick has four PCI slots across two PCI busses. Each CPU brick also has a Fuel-style XIO slot, which can accept a DMediaPro DM3 card or a VPro graphics card. The first CPU brick in a system has a single PCI slot holding an IO9 BaseIO card with SCSI interfaces for two internal disks, an external SCSI port, audio I/O and a twisted pair Ethernet connection. Other kinds of bricks are available that are dedicated to disk storage or further PCI slots.

The different configurations are:


An Origin 350 cannot be booted by itself without the presence of an IO9 card, it requires the IO9 to start up. If a brick lacks it, one must be installed or otherwise the brick must be numalinked.

Each brick can take dual or quad CPU configurations the same as the Tezro. The CPUs are attached to the node board, thus a configuration upgrade requires removal of the entire node board.

On introduction SGI claimed an industry-leading 3.2 GByte-per-second processor to memory bandwidth, and half that to the graphics subsystem. The DIMMS used are compatible with those used in the Origin 3000, Fuel, and the Tezro. There are a total of eight slots, organized into four banks of two slots. This results in a memory capacity from 512 MB to 8 GB total system memory.

All DIMMS for the Origin 350 use Double Data Rate (DDR) synchronous dynamic random-access memory (SDRAM), at the lowest level organized into banks of two DIMMs each - memory may only be added or removed from the system in pairs of two DIMMs. Both DIMMs within a bank must be of the same density, however two different banks may hold different density DIMMs from each other.

SGI produced DIMMs with capacities of 256MB to 1GB, using DRAM chips with densities of either 128 Mbits or 256 Mbits. All DIMMs include directory memory to support cache coherence between local and remote memory. Memory was generally marketed in kits of two DIMMs, where the capacity of the kit would be given as 512MB, 1GB, or 2GB.

Two USB ports and PS/2 are provided. USB Mass storage is not supported for the SGI PROM and by IRIX.

NUMAlink is a high-speed low-latency switched fabric computer bus used as a shared memory computer cluster processor interconnection in Silicon Graphics computer systems. The Origin 350 leverages NUMALink heavily to link bricks together. Each unit has a NUMALink and an XIO port, used to link various subsystems together.

Multiple bricks are co-ordinated at startup time via an L2 Controller which communicates to the bricks via USB ports. The L2 Controller is an external PowerPC Linux unit with console, USB, modem and ethernet ports.

A system consists of up to eight CPU "bricks" (2 rackmount units high each) with up to four CPUs in each brick, giving a maximum of 32 CPUs. CPU bricks are connected together via NUMAlink3 cables going to a central NUMAlink Router (or NUMAlink Module) which is another 2U rackmounted unit.

The Origin 350 has a front bay for two U160 SCSI drives. It uses proprietary sleds for this purpose.

The units carry "Assy A65278-00x" on a sticker, where the "-00x" may end in any digit though "-005" seems common. This assembly number can be useful when searching for parts in the Internet. According to SR1300/SR2300 support documents at intel.com, the Intel accessory part number for the drive carrier is FXX2DRVCARBLK, UPC code "7 35858 14621 0" and "MM #" 835853. However note that there is some indication that Intel may recycle these accessory part numbers in the FXX- form between different models.

The main issue affecting these units is invalid serial numbers, which can be fixed using another brick, an L2 controller, or an L2 emulator called an L3 controller.

It is recommended to use 1GHz boards in the Origin 350, not a Tezro desktop, for the reason of airflow and longevity.