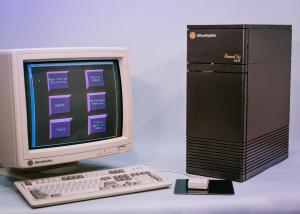 The Personal Iris was introduced in 1988 as low end workstation to the IRIS 4D series based on MIPS RISC microprocessors. A model name consists of "4D/" and a code designating the CPU and graphics type. The models replaced the "Twin Tower" style Professional IRIS series on the low end market, with the POWERSeries taking the higher end market. All Personal IRIS systems use a 32-bit MIPS I core and share some parts commonality with the R3000 Indigo in the 30 and 35 models. The last model (4D/35) was introduced in 1991 and presumably sold through 1993 with the release of the Indy heralding the end of the IRIS line.

The series came in four models differentiated by badging, and the contents of the system module inside the case. No major external differences are otherwise shown. Between the 4D/2x and the 4D/3x systems are major differences. The latter one uses a totally different system board which besides faster processors includes a newly designed memory interface that allows much higher bandwidth and a larger amount of main memory. The system bus of the newer boards is clocked at 30 MHz instead of 10 MHz.

The Personal IRIS had either a Datastation (Server) configuration, or they could utilize VME-based Eclipse or Express graphics, the latter only being usable on the 30 and 35 models due to a common architecture with the Indigo.

The Personal IRIS, unlike later SGIs, does NOT possess support for PS/2 and uses the 4D-style DB9 keyboards used by the Personal/Professional IRIS series. To use PS/2 peripherals necessitates an adapter.

Personal IRIS models 4D/20 and 4D/25 have basic audio capabilities onboard. For audio in 4D/30 and 4D/35 an optional board is required that is plugged into a special slot on the mainboard. That additional board is called Magnum Audio Option and offers 16bit/stereo audio instead of the 8bit/mono audio that was offered on the earlier Personal Iris models.

The Personal IRIS has a built in SCSI controller that supports the internal as well as the external SCSI devices. The SCSI connector is located on the back of machine itself (just right of the E-Module) and is also covered by the plastic skin. The internal drives connect to the same SCSI chain that is also available via that external centronics SCSI port. The SCSI controller is narrow SCSI, Western Digital 33C93A.

All Personal IRIS systems allow the owner to install double height 6U VME devices. The VME interface of the Personal Iris also supports busmaster devices which may directly access the main memory of the computer. Only the 4D/30 and 4D/35 models allow VME block transfer due to a new peripheral controller on the system board.

Power supply problems are not uncommon with these systems. Unplug the power cord, then open the opposite side of the E-Module and remove the sheetmetal. The power supply has 2 replaceable fuses which are worth to check as well as the proper cabling. One fuse is on the small daughtercard, the other is next to that card and usually covered with a blue plastic cap.

Signs of failure: The system fails to boot and returns to PROM after issuing "Can't set tod clock"

This problem has so far been seen only on the later Personal Iris models (4D/30 and 4D/35). The earlier systems may not be affected and just boot with a faulty date/time.

While there also may be other causes, the by far most likely is an empty battery on the CPU board. The original battery is a 3V coin cell made by Duracell (DL2450). The battery is socketed so replacing it doesn't require any soldering. The cost of the battery is approximately 3 USD / 2 EUR.

Signs of failure: System doesn't work when more than one set of 4MB modules is installed.