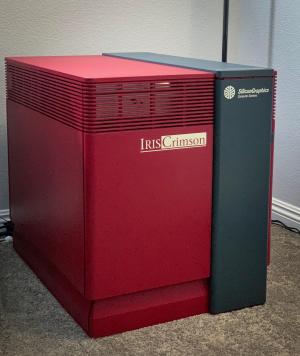 A Crimson in a more normal configuration

The IRIS Crimson or simply Crimson is the successor to the Power Series, first released in 1992. It was the first SGI workstation released with a 64-bit processor.

The Crimson was a member of Silicon Graphics' IRIS 4D series of deskside systems; it was also known as the 4D/510 workstation. It was similar to other SGI IRIS 4D deskside workstations, and could utilize a wide range of graphics options (up to RealityEngine). It was also available as a file server with no graphics.

*These boards are identical to the IRIS Indigo

The memory modules used in the Crimson are the same as on the MC2 memory board used by the Power Series. However, unlike other IRIS 4D series machines an MC2 board is not recognized by the system. All memory (up to 256MB) must be installed on the IP17 mainboard.

While the MIPS R4000 is a 64-bit processor, the Crimson is only capable of running it in 32-bit mode.

IRIS Crimson can operate with IRIX 6.2, but there are bugs in fx.IP17 in the IRIX 6.2 release. In order to prepare a drive you will either need an earlier version of fx, or you must run fx on another system to partition the drive first.

The bus frequency is half of the core speed, either 50MHz or 75MHz depending on the CPU installed.

The differences between the two versions include the PROM revision and different logic on the board.

The Crimson does not support an MC2 board, any memory up to the maximum amount of 256MB must be installed on the IP17 board.

The Crimson supports only one IP17 board unlike its successor, the rackmount Onyx, which supports multiple CPU boards depending on configuration (the deskside Onyx only supports one CPU mainboard but with multiple processors)

The Input/Output mainboard supports the following:

The Crimson could be outfitted with seven different graphics setups depending on the end-user's desired needs. Users seeking a file server could opt for no graphics option, which would mean relying on a terminal or network connection to manage the system as there is no basic graphics capability built into the IP17 or IO3B boards. The six other options consisted of varying levels of performance, ranging from Entry graphics, all the way to RealityEngine. These graphics systems were independent of the IP17 and IO3B boards and could be swapped out in order to provide more or less capability as required.

As the IRIS Crimson had already been replaced by the Onyx and Onyx2 prior to the year 2000, little to no work was done to patch the system prior to the turn of the millennium. While the Crimson is not Y2K proof, the error it encounters is not fatal and can easily be rectified by adding a daemon to startup that will sync the time via NTP and reset the Crimson's internal clock. Failure to re-sync the time will cause the system to gain at least one year each time it is restarted until it reaches the end of the Unix epoch at which time it will cycle back. This has the potential for corrupting files and causing licenses to expire prematurely. 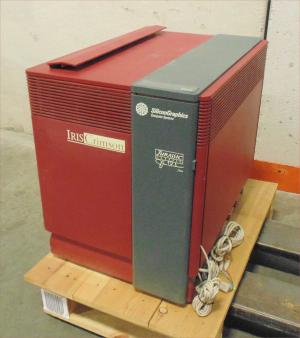 An IRIS Crimson appeared in the main operations center of Jurassic Park. During one scene in the film, the granddaughter of the park's creator, Lex, used the machine to navigate the filesystem of IRIX 4.0 using the application FSN in order to reactivate the locks on the operations center doors. The increase in popularity of the Crimson following the release of the movie prompted Silicon Graphics to release a special edition model referred to as the "Jurassic Classic." It was notable for being marked as such on the outside of the case, in addition to being signed by Silicon Graphics founder Jim Clark.